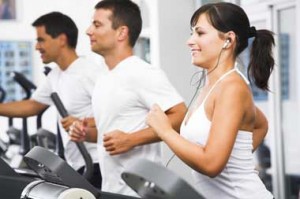 Do you have trouble trying to convince yourself to hit the gym for an hour at a time?  Now you may not have to!  A new study out of Denmark has shown that 30 minutes of vigorous exercise (enough to break a sweat) can actually help you to lose as much, if not more, body weight and fat.  That’s right, you can actually get the same results in half the time!

The study followed 60 overweight men that indicated they were motivated to make a lifestyle change.  Half of the group was instructed to follow a 30-minute exercise regimen, while the other was told to follow a 60-minute one.  Both groups were told to work hard enough to produce sweat.

The researchers postulate that the results are most likely due to a few factors.  The first being that many see a 30-minute exercise routine as easier and more doable than a 60-minute one, and often have more energy to and desire to exert more energy after their routine, be it playing sports or the like.  Also, they believe that those who worked out for 60 minutes most likely ended up eating more, causing them to lose slightly less weight than anticipated.

So if you think you need to work out for an hour at a time to get results, but committing to an hour at the gym that is keeping you from getting in shape, you’re in luck!  Take that measly 30 minutes out of your day, and you can work your way to a healthier you in no time!