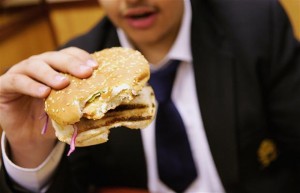 We’ve all been told that diets high in sugar, salt and calories (also known as the “cafeteria diet”) are a quick way to put on weight, and should be avoided whenever possible.  A new study lends credence to this train of thought, indicating that it can also significantly increase one’s risk of metabolic syndrome and even stroke.

The researchers in the Canadian study gave sedentary rats unlimited access to healthy food pellets and water.  They were also offered the same access to a selection of “junk food” items, including cookies, cupcakes and sausage, as well as a sucrose solution that simulated soft drinks.  The rats in the study were at an age about the equivalent of 16 – 22 years old in humans at the time of the study.

Researchers found that, like many humans, the rats tended to prefer the junk food to the healthy options.  They also found that within two months of beginning the study, most of the rats had developed most of the symptoms associated with metabolic syndrome (high cholesterol/blood sugar/blood pressure and obesity).  This lead the researchers to believe that there will soon be an increasing number of strokes and heart disease/dementia patients in people in their 30’s and 40’s if current dieting trends remain unchecked.

So next time you reach for that cookie, try to remember that it may be doing more than just going to your hips.  Instead, treat yourself to some fresh fruit or other healthy snack.  You will thank yourself time and again when you start approaching that mid-life crisis.